THE MENACE OF POVERTY. (SHORT STORY BY JOHN CHIZOBA VINCENT) 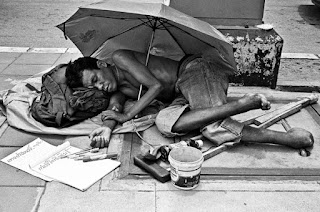 She rushed out of the house with a heavy load on her head, drastically she moved without minding what would become of the baby in her womb. She had been cheated by nature many times, now, she wanted to go and face her 'Chi' and ask her why she  torment her with a child that could not come and stay. She thrust all the things she met on her way aside and ran as fast as her legs could carry her. All that she wanted is to get to the other phase of the world where the pains of motherhood won't hurt her again. The pains that pierced through her body every year does not make her a successful woman but a failure as she see herself. She must go and see her 'Chi' and know from her if she was a worst kind of woman that calamity would befall her all the time. Last week, she lost her husband, Obikaku, who went hunting and couldn't return home again. He only told them that he was going to check his traps in the bush and he never returned home again. He didn't return home to see his family. He didn't say goodbye to them, he didn't bring the bush meat he promised to bring to the family. He just left; went to the otherside of the world where human souls speak of truths and honest, then left them here to perish where demons hunt for human souls. He left them with nothing but a broken promises that bleed blood. He left them with debts to pay; debt of palm wines, his age grade meetings, the goods he bought on credit. He left with so much debt that his fifth generation won't be able to pay. And  now on the ground is her son, Obigbo, who collapsed  this morning.


The earth has mocked her enough, the sun has baptised her enough with suffering, she wanted to end it all; end the madness that look at them like a friend but he is an enemy; enemy of progress. The air has tortured them enough, the water now look at them like people without hope. The dancing of the grasses around her home does not mean the grasses are happy for her, but the dance signified anger; anger and pains in their side, pains; because  she has failed the world as a woman who lost all she had in the cold hands of death and, anger; because she has no one to talk to as a child except that which laid on the ground lifelessly.


She kept moving at a faster pace without looking back. Her hair looked dirty and unkept, on her was a tattered cloth which foretells the future. All the veins in her body stood, her breast kept thrusting her backward but she continued in her race with the demons of frustration that followed urging her to commit the suicide in her mind, her head; heavy with an emotions so rare to find among humans.


"Ugonma! Ugonma!!  Some screeched in fear.

"Come back! Come back and don't kill yourself!
Others shouted going after her.

"Life is unfair" some waved their heads in pity.


At the midst of the madness in the air, she was caught in between death and life. The men held her to their ransom. While she barked and cursed the air, and beat them but they didn't mind. They bundled her home desperately. At home, they saw Obigbo on the ground, sprawling like a person that overfed himself. He looked pale, skinny like a person who is being chased by a fierce death. The people that gathered took pity on him.


" I want to die and meet my 'Chi' then ask her why she is punishing me like this, in this condition of pain. I want to die! I want to die! Leave me alone! Enough of this pains and poverty life. I want to die.". Ugonma kept ranting on the ground where two men kept guide on her.


Looking at the little boy of ten years old on the ground, many mouths began to wag and give out their suggestions why Ugonma has taken the step she took. Many knew she lost two children last year, Obiulo and chiamaka, and last two years, she also lost a boy, Onwubiko. Now the skeletal body on the ground seemed in a hurry to go, to leave her again and join the others. Some promised to take Obigbo to the hospital to be taken care off while others promised to assist Ugonma in terms of her family upkeep. Maybe that would show her that the people still cares about her.


In less than an hour, Obigbo was carried by some men shoulder high into a car with his mother and the vehicle drove off towards the southern part of the village. As they went along the wet road, the  leaves of the trees waved in joy, the birds chirped in their nests, the breeze drove many papers in the air. Right in behind the road are men and women coming back from Farm, some have pans on their heads while some with cutlasses and some, a hoe or spade. They were all happy people, smiling and laughing. Ugonma wondered why her life is different from theirs, why she is not like others. She took pity on herself and managed to give out a weak smile after looking at Obigbo and discovered that he was now breathing normal. When they got to the hospital, Obigbo was brought down from the vehicle by two men who volunteered to follow them. The driver helped Ugonma out and they went straight into the emergence ward so that Obigbo could be treated as soon as possible.

Two months later, Obigbo came back well and hearty. Ugonma was joyful, joyful because the once lost child is back to normal  and bubbling with life. Ugonma looked forward to the day she would have the money to send him the school of his choice. That day she would be taking him to school among other children. But not quite long, Chief Okeosisi visited,  he was a business associate to her late Husband, Obikaku, he came for his money; the money that Obikaku was owning him before he died, he signed a deal with him that if he could not pay up his debts that his son should serve him as a slave until he could save up the money owned.


His stomach was as big as the surface of a mortar used for pounding yam. His head, small and  shaped like a coconut but fashionably shaped in a fashionable manner. He wore Agbada with an embroided design on it. He looked good and fashionable. When Ugonma saw him in the room, her heart jumped out from her stomach racing through the sinful cold ground. She looked confused looking from one angle of the tattered striped house to the other. The baking of another problem has just begun.


"I don't need to introduce myself anymore, I'm no longer  a stranger here. You know my deal with your late husband, Obikaku. It is either my money or your son is leaving here today with me. You chose one." Chief Okeosisi explained, face up.


"Keep quiet! Quiet woman!! I will not hesitate to drag him along with me if you refuse. My farmlands need labourers, if you are not blind, you will see many of those boys and girls outside, they are from my debtors. Some I will marry and some, I will make my slaves and; some will work in my plantations and your son is not better than them".


"Endure for a while, Chief,  I will pay you before this month ends" ugonma pleaded.


"Lele, chelukwa! Where do you have  in mind to get the money? In fact woman, I don't need my money again, I need that boy to serve me, Inugo! Obigbo! Obigbo!! Where are you? Come over here we are going home now."


"Chief, chief, chief,  you can't do this to me. Please temper justice with mercy. I will pay you in due time".  Ugonma pleaded on her kneels.

"Your husband said the same thing before he died, now I won't look back on your tears, no! Fair exchange is no robbery." Chief okeosisi ranted here and there in annoyance.


"Please Chief, just give me more time, None but the brave deserve the fair, a drowning man will always clutch at a straw. As a twig is bent so the tree's inclined. I have been brave many times, answer the calls I make now; for we never miss the water till the well runs dry.". Ugonma wailed on the ground pleading.


" We always set a thief to catch a thief, he was a thief before he died but so unfortunate I didn't catch him. None so deaf as those who will not hear the beating of the drums in the market place. Fine words butter no parsnips. I have to do that which is in my mind"


Fiercely, he dragged Obigbo outside without even allowing him to take one or two cloth from the house. He cried and screamed for help but none came to his rescue. By now many people had gathered in front of the house watching what was going on between Ugonma and Chief Okeosisi. Many people knew him to be a hard man, who hard-hit people because they were poor. He never pity his prey whenever they fall in his trap. Some of those that he took their children as his slaves came around also, pleading and begging to no avail. The village torn into two as people wailed here and there just because of Chief Okeosisi rudeness. They were under the same cloud of frustration but no hope seen, even the king can't help.


Some pleaded with Chief Okeosisi but he didn't listen rather he dragged Obigbo along with him and others. Immediately Obigbo was dragged out of the room, ugonma fainted on the ground in tears. She began to bleed profoundly. Many women rushed to her but they were too late to save her life, too late to save the baby in her womb, too late to help to couple togther the madness in the air, too late to break a silent that  chip off the old block that had built a home in the heart of Ugonma; she was gone, gone with her baby, gone leaving her only surviving palm fruit in this wicked forest called life.


When Obigbo heard the scream of one of the ladies among the women that rushed to help his mother, he knew that something has happened. He was dead-beat. He wanted to free himself from chief Okeosisi' hand but he couldn't. Desperately, he snatched a digger that a girl among them was holding and stabbed himself on the stomach. The world became silence to him, a film like a dark cloud covered his face and he was gone to join his mother. Every was frozen, not even the living was moving.