Some take it seriously. Some bid it farewell just after the clock strikes twelve. Some call it a Second Chance to Dream with Eyes Open. New Year Resolution — no one can deny having made some.


People change with time, so do their aspirations. Seriously taken, Happy New Year Resolution is an opportunity to gauge our goals. For the adventurous souls, it is the opportunity to tickle a funny bone or to try something bold.
123NewYear offers Fifty amazing New Year Resolution 2016 ideas. Some are simple, some are exotic – but each is unique in its own way – there is surely a one that would appeal to you! 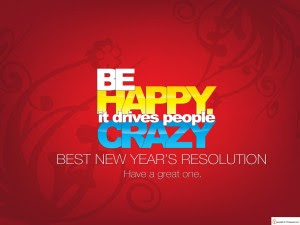 CITADEL OF LIFE LECTURE #By Sunsampaul Venue: Citadel of Life@whatsapp.com

instrumentalist and a spoken word artiste.

Today I'll be talking on STYLISTIC TECHNIQUES IN WRITING

Before I proceed. What is writing?
Writing is the process of representing a language with symbols or letters.
Writing is the act of penning down what you are to say

Many people write but don't know the style they are writing or what
they are even writing .
All they could say is  'article is article'

Now let open the book of the word 'stylistic'

Stylistic is a pertaining to style, especially to linguistic or literary style

In literature we have three major genre. Which are:
Poetry
Prose
Drama

Now before you write you must know that stylistic techniques must not
be lacking. Which are :

Allusion:
It is an author’s reference to a person, place, event, or piece of
literature which he expects his audience to recognize or understand.
Example:  In John Steinbeck’s Grapes of Wrath, the author assumes his
readers’ familiarity..pls try and read that book
You will see what I'm saying

You will find it in any good book shop

Caricature:
I Sunsampaul will tell you that this is a representation of a
character in which, in literature, his or her characteristics are
exaggerated to produce a comic effect.  Example:  In Twain’s
Huckleberry Finn, the “Duke” is a caricature designed to satirize and
create humor.

Consciousness, Stream of A style of writing:
This is a method in which the author uses interior monologue to show
how the mind works.  The unbroken fl ow of a character’s thoughts and
perceptions are revealed either directly (first-person narrative) or
indirectly through free-wheeling discourse.

Modernism & Epiphany In literature:
These are sudden revelation that illuminates meaning or
understanding—an “aha” moment.

Foreshadowing:
This is a hint of what is going to happen next.  Example:  In
Shakespeare’s Romeo and Juliet, the speech by Friar Lawrence about the
mingling of good and evil foreshadows the coming entanglements.
This is a clear example of foreshadowing.

In Media Res:
This is a Latin expression that means that the story actually starts
in the middle of the action.  Example:  Since the Odyssey starts in
Media Res, with Odysseus imprisoned, an audience already familiar with
the character Odysseus can forego mention of his background and go to
the heart of the action.

Irony:
This is a literary device in which action or language stands in
contrast to what appears to be true or expected.  Example:  “Dr. Fujii
hardly had time to think that he was dying before he realized that he
was alive...”

Do you know there are several types of IRONY?
If you don't, just relax, today I will teach us the types of irony
we've in literature for we to know them vividly when writing any muses

TYPES OF IRONY
1) Cosmic Irony:
This is a literary device that contrasts what a character attempts to
become and what.  actually happens, due to forces of the universe.

2) Dramatic Irony:
This is also called Tragic Irony, this occurs when what a character
says or believes contradicts what the audience knows to be true.  In
these circumstances, a character’s words and actions have one meaning
for the character and an entirely different meaning for the audience.

3) Situational Irony:
This is a literary device in which the expected action and the actual
action are in direct contrast, usually due to forces out of the
control of the characters.

4) Structural Irony:
This occurs when a naïve protagonist holds a view or outlook that
differs from the one the author holds.  The reader will usually feel
intellectually superior to the protagonist, and empathy for the hero
often suffers.

5) Verbal Irony:
This is a figure of speech in which a character says one thing but
actually means the opposite.  Sarcasm often falls into the
classification of verbal irony.

These are the types of irony we need most in life. Let move to the
other stylistic techniques in writing

Let's move on to other stylistic techniques in writing

Melodrama:
This is a drama of any type that relies on stereotypes or two
dimensional characters whom the audience recognizes. An exaggeration
of emotions, behaviors, and events is often evident in a melodrama.
Example:  Melodramas often use a serialized story line, damsels in
distress, and characters who are clearly good or evil, as in the early
silent film “The Perils of Pauline”.

Pathos:
This is the manner in which a play or story’s action causes the
audience to feel pity for a character.  In drama, it occurs mainly in
tragedy, but can be found in comedy too

Poetic Diction:
This is a manner of speaking or expression that is used mainly in
poetry and not in casual conversation.  Example:  William Wordsworth’s
poem, “Ode: Intimations of Immortality from Recollections of Early
Childhood,” provides a classic example of the elevated language of
some poetry.

Poetic License:
This is the privilege of a writer to take liberties with grammatical
rules and structure for desired poetic effects.  Example:  E.E
Cummings is a poet who has made the most of the freedoms of poetic
license

Theme:
This is the overriding or dominant idea in a story that is a universal
statement about humanity.  The theme is the central meaning in a piece
of writing and the message that the author wishes the audience to
understand and take away.  Theme may be represented in an indirect
fashion, and differing devices may be used to hint at theme:  the
title, certain quotes, a repeated observation, a recurring motif can
make the reader discover the theme Example:  Justice, dignity, and
freedom can be themes of a certain poem or story. It depends on the
writers motif of writing that particular muse that can as well make
the reader to discover the theme of the muse 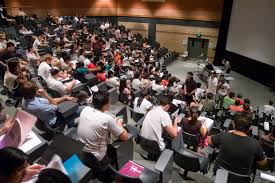 ONE MORE RIVER TO CROSS(a poem by Decent Innocent)

The ocean was deep and huge
The wave so heavy and scary that crossing over flee my thought
But with my paddle and mini boat I hopefully paddled to this very last
moment despite the rocks and flood...

Moments when unemployment, failure, sickness, hate, poverty will be
BURIED for the RESURRECTION
prosperity

Chie, moments when we say farewell to Christmas songs, disco light,
sounds of bangers and rockets stoned to the sky

Moments when we stroll with friends, relations or lover sharing
stories of the previous moment

Moments when we light up tyres, roll round the burning flames
screaming Happy New Year 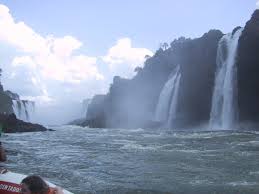 of employment, success, health, love and
Posted by Unknown at 5:20:00 AM No comments: 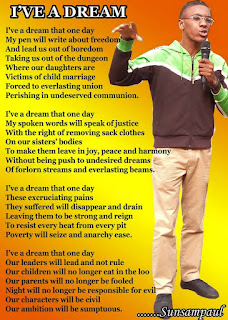 I have a dream that one day
My spoken word will speak of justice
With the right of removing the sack clothes
On our sisters' bodies
To make them leave in joy, peace and harmony
Without being pushed to undesired dreams
Of forlorn streams and everlasting beams

I have a dream that one day
My pen will spark and lead the way
Where many has lost turn
Some unable to return
Due to the massive thorns.
Alone in the confines of their heart
They always place their mat
And trade to the path
Of a greater act.

BRIEF BIOGRAPHY: Sunsampaul Egwu Philosopher is a poet, a prose
writer, a spoken word artiste and an instrumentalist, he studies
computer science and he's a blogger, a founder of Citadel of Life and
a pioneer of Ghetto City of Poetry. Email address:
sunsampaul4globe@gmail.com. Tel: +2348180861170
Posted by Unknown at 5:14:00 AM 3 comments: