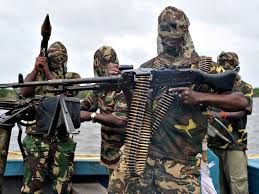 Boko Haram was founded as a Sunni Islamic fundamentalist sect, influenced by the Wahhabi movement, advocating a strict form of Sharia law. It developed into a Salafist-jihadi group in 2009. The movement is diffuse, and fighters associated with it do not necessarily follow Salafi doctrine.[35][36][37][38][39] The group has denounced the members of the Sufi, the Shiite, and the Izala sects as infidels.[40] Boko Haram seeks the establishment of an Islamic state in Nigeria. It opposes the Westernization of Nigerian society and the concentration of the wealth of the country among members of a small political elite, mainly in the Christian south of the country.[41][42] Nigeria is Africa's biggest economy, but 60% of its population of 173 million (2013) live on less than $1 a day.[43][44][45] The sharia law imposed by local authorities, beginning with Zamfara in January 2000 and covering 12 northern states by late 2002, may have promoted links between Boko Haram and political leaders, but was considered by the group to have been corrupted.[46]:101[47][48][49]
According to Borno Sufi Imam Sheik Fatahi, Yusuf was trained by Kano Salafi Izala Sheik Ja'afar Mahmud Adamu, who called him the "leader of young people"; the two split some time in 2002–4. They both preached in Maiduguri's Indimi Mosque, which was attended by the deputy governor of Borno.[32][50] Many of the group were reportedly inspired by Mohammed Marwa, known as Maitatsine ("He who curses others"), a self-proclaimed prophet (annabi, a Hausa word usually used only to describe the founder of Islam) born in Northern Cameroon who condemned the reading of books other than the Quran.[29][51][52][53] In a 2009 BBC interview, Yusuf, described by analysts as being well-educated, reaffirmed his opposition to Western education. He rejected the theory of evolution, said that rain is not "an evaporation caused by the sun", and that the Earth is not a sphere.[54] 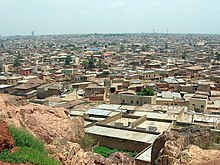 Kano, biggest city in northern Nigeria
Further information: Fourth Nigerian Republic
Before colonization and subsequent annexation into the British Empire in 1900 as Colonial Nigeria, the Bornu Empire ruled the territory where Boko Haram is currently active. It was a sovereign sultanate run according to the principles of the Constitution of Medina, with a majority Kanuri Muslim population. In 1903, both the Borno Emirate and Sokoto Caliphate came under the control of the British, who used educational institutions to help spread Christianity in the region.[55] British occupation ended with Nigerian independence in 1960.[56][57][58]
Except for a brief period of civilian rule between 1979 and 1983, Nigeria was governed by a series of military dictatorships from 1966 until the advent of democracy in 1999. Ethnic militancy is thought to have been one of the causes of the 1967–70 civil war; religious violence reached a new height in 1980 in Kano, the largest city in the north of the country, where the Muslim fundamentalist sect Yan Tatsine ("followers of Maitatsine") instigated riots that resulted in four or five thousand deaths. In the ensuing military crackdown, Maitatsine was killed, fuelling a backlash of increased violence that spread across other northern cities over the next twenty years.[59] Social inequality, poverty and the increasingly radical nature of Islam, locally and internationally, contributed both to the Maitatsine and Boko Haram uprisings.[46]:97–98
In the decades since the end of British occupation, politicians and academics from the mainly Islamic North have expressed their fundamental opposition to Western education. Political ethno-religious interest groups, whose membership includes influential political, military and religious leaders, have thrived in Nigeria, though they were largely suppressed under military rule. Their paramilitary wings, formed since the country's return to civilian rule, have been implicated in much of the sectarian violence in the years following. The Arewa People's Congress, the militia wing of the Arewa Consultative Forum, the main political group representing the interests of northern Nigeria, is a well-funded group with military and intelligence expertise, and is considered capable of engaging in military action, including covert bombing.[60]

Mohammed Yusuf founded the sect that became known as Boko Haram in 2002 in Maiduguri, the capital of the north-eastern state of Borno. He established a religious complex and school that attracted poor Muslim families from across Nigeria and neighbouring countries. The center had the political goal of creating an Islamic state, and became a recruiting ground for jihadis. By denouncing the police and state corruption, Yusuf attracted followers from unemployed youths.[36][56][61][62] It has been speculated that the reason Yusuf founded Boko Haram appears to be that he saw an opportunity to exploit public outrage at government corruption by linking it to Western influence in governance.[63] He is reported to have used the existing infrastructure in Borno of the Izala Society (Jama'at Izalatil Bidiawa Iqamatus Sunnah), a popular conservative Islamic sect, to recruit members, before breaking away to form his own faction. The Izala were originally welcomed into government, along with people sympathetic to Yusuf. Boko Haram conducted its operations more or less peacefully during the first seven years of its existence, withdrawing from society into remote north-eastern areas. The government repeatedly ignored warnings about the increasingly militant character of the organization.[37][64] The Council of Ulama advised the government and the Nigerian Television Authority not to broadcast Yusuf's preaching, but their warnings were ignored. Yusuf's arrest elevated him to hero status. Borno's Deputy Governor Alhaji Dibal has reportedly claimed that al-Qaeda had ties with Boko Haram, but broke them when they decided that Yusuf was an unreliable person.
Posted by Unknown at 7:21:00 AM 1 comment:

Remember me when I am gone away,
Gone far away into the silent land;
When you can no more hold me by the hand,
Nor I half turn to go, yet turning stay.
Remember me when no more day by day
You tell me of our future that you plann’d:
Only remember me; you understand
It will be late to counsel then or pray.
Yet if you should forget me for a while
And afterwards remember, do not grieve:
For if the darkness and corruption leave
A vestige of the thoughts that once I had,
Better by far you should forget and smile
Than that you should remember and be sad. 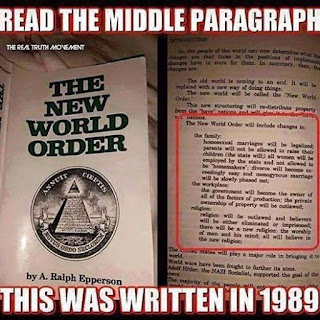 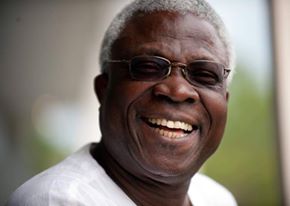 THE SONG OF MR. TOAD (A POEM BYKENNETH GRAHAM)

The world has held great Heroes,
As history-books have showed;
But never a name to go down to fame
Compared with that of Toad
The clever men at Oxford
Know all that there is to be knowed.
But they none of them knew one half as much
As intelligent Mr Toad!
The animals sat in the Ark and cried,
Their tears in torrents flowed.
Who was it said, “There’s land ahead?”
Encouraging Mr Toad!
The Army all saluted
As they marched along the road.
Was it the King? Or Kitchener?
No. It was Mr Toad!
The Queen and her Ladies-in-waiting
Sat at the window and sewed.
She cried, “Look! who’s that handsome man?”
They answered, “Mr Toad.” 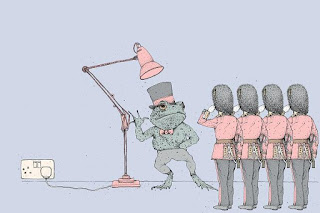 Sunset and evening star,
And one clear call for me!
And may there be no moaning of the bar,
When I put out to sea,
But such a tide as moving seems asleep,
Too full for sound and foam,
When that which drew from out the boundless deep
Turns again home.
Twilight and evening bell,
And after that the dark!
And may there be no sadness of farewell,
When I embark;
For tho’ from out our bourne of Time and Place
The flood may bear me far,
I hope to see my Pilot face to face
When I have crost the bar.

A POEM. CROSSING THE BAR

Stop all the clocks, cut off the telephone,
Prevent the dog from barking with a juicy bone,
Silence the pianos and with muffled drum
Bring out the coffin, let the mourners come.
Let aeroplanes circle moaning overhead
Scribbling on the sky the message “He is Dead”.
Put crepe bows round the white necks of the public doves,
Let the traffic policemen wear black cotton gloves.
He was my North, my South, my East and West,
My working week and my Sunday rest,
My noon, my midnight, my talk, my song;
I thought that love would last forever: I was wrong.
The stars are not wanted now; put out every one,
Pack up the moon and dismantle the sun,
Pour away the ocean and sweep up the wood;
For nothing now can ever come to any good.
Funeral Blues is Copyright © 1936 by W.H. Auden. Reprinted by permission of Curtis Brown.
Posted by Unknown at 2:32:00 AM 3 comments: