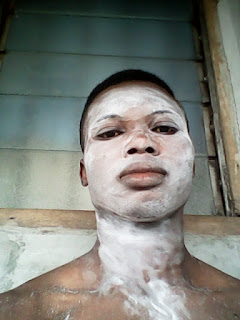 There was a certain rainy season that swept the joy of many inhabitants of a dilapidated village, their huts were swallowed by flood, their properties destroyed, like a dream in their eyes; the roofs left its root to another hood. Some were slightly noticed to be flying over the air. It was indeed a terrifying and terrible experience for Uchenna and his brothers, whose Uncle lives in Port Harcourt; yet he had been adamant in helping them.

Uchenna and his brothers being orphans, passed through excruciating pains in the chronic hands of poverty. They lost their parent at a tender age. And every since then their Uncle refused training them.

Uchenna being the senior among his two brothers, decided to travel to Port Harcourt to live with his Uncle, so he can be able to send some money for his brothers as he work. His Uncle agreed after he read Uchenna's letter. Unknowingly for Uchenna that he will be use as slave and maltreated to the core.

When he got to Port Hacontaining s Uncle didn't put him in any of his shops or businesses. He started using him as house maid to wash dishes and do all house chores including cooking and washing the toilets. As if that was not enough. The wife always beat him up each time he woke up late for the Day's chores. This maltreatment continues and Uchenna was not happy with it. Due to he barely eat enough food. After cooking it, his Uncle's wife will hide the pot of food for him not to eat.

He bothered how his brothers will be fairing in the village. He decided to write back home to one of the village Elder he entrust his brothers to, he explained to him why he haven't sent any money back home to care for his brothers as promised. He further explained how his Uncle and wife maltreat him, that he is living in bondage. No freedom and they use him as slave while their children enjoys and mock him. Mazi Kenneth read the letter and write back to Uchenna, assuring him his brothers are well taken care of. Mazi being a kind man, though he has no riches. He assured him that he'll take him out of bondage, that life and kindness isn't about riches. That he'll save him before they cause harm to his health, because health is better than wealth.

Two days later Mazi travel to Port Harcourt in the early cry of the cock. He reported the case at the police station close to Uchenna Uncle's house. After reporting to them about the case at hand; that it is child abuse for such age of Uchenna to be maltreated by his own Uncle. He further lamented that they are at the height of killing the little boy, due to the little boy is fourteen years old, striving to help his little brothers because  they are orphans.

Three police men followed him and entered the apartment of Uchenna' Uncle with Mazi and found the Uncle flogging Uchenna mercilessly while his children mock him. They caught his wife with a saucer containing grounded pepper and white substance which was noticed she used it on Uchenna's eyes and face that made his face white as her husband randomly flog him. They were all arrested and charged for child abuse.

Uchenna was taken to hospital he was properly treated and his brother were properly taken care of by Mazi. When he was discharged, he registered his appreciation on Mazi who delivered him out of bondage. Mazi decided to take him and his brothers as his children, while his Uncle and wife face the full wrath of law.