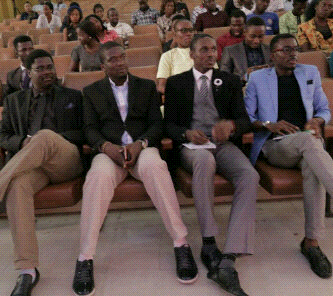 This poem was found,
In the skulls of sages that were dead.
They painted lines of unity,
With their blood that were red.

They passed through torment,
So many times and different moments.
They were labelled bad,
Because they were black.

Africans passed through excruciating pains,
Every fight brought no gain.
But we still live as one,
Even if our slave masters won.

Babies now breast feed babies in the slum,
All they sucked tasted like a plum.
The bombing and killing,
Beheading and destructive mining.

All these things happen, yet we are still strong;
We refused to be wrong.
Even if we were denied our right,
We'll still fight in the night like knights.

We'll embrace one another like our wife,
We live a good life.
And sharpen our knife,
So we can be able to strike.

Our mouth will speak peace,
More effective than that of a mouth piece.
We all will be united in all states,
Even in season and out of season.


Sunsampaul Egwu Philosopher is poet, blogger, writer,and 300 level computer science student of National Open University of Nigeria. He's the pioneer of Ghetto city of poetry and CEO of citadel of life. He was the winner of poetry court join me write poetry competition and talented poet annual duel together with figure of speech first winner duel in Lagos. His poems are publish on several hard copies anthologies and blogs. His email is Sunsampaul4globe@gmail.com and his number is
+2348180861170
Posted by Unknown at 6:25:00 AM