I was soaked by the sound hissing water,
Falling from the clouded sky with haste.
Whipping me with whips that paste,
Leaving me to shiver like a busy river,
Creating zebra crossings with no rival,
That clustered my face like a closed louver.

I was soaked by the forlorn promises
Of those honey badgers.
Whose Spittles painted my lips pink.
Those Spittles are lies that taste like ink,
Leaving me in the thighs of regret,
As they gallop and wink.

I was soaked by the acidic deceits of those wolfs.
Who are poly thieves in politics,
Clapping their hands to cover the truth,
Sitting on lies to kill the root of truth.

I was soaked by the pathetic sufferings of those gaffers.
Whose progenies have deserted them,
Leaving them to burry their heads in the dungeon of poverty.

I was soaked by the blasting wails of those little girls,
Who passed through excruciating pains.
Their prides become places of rides,
Thunder clap shying from their faces in shame.

I was soaked by the sizzling sermon
Of one man one woman,
When one woman can't satisfy one man.
Same woman fail to produce a male offspring,
And the man can't chop, if he fails to be in his workshop.
Can one woman produce Fourteen offsprings?
Man need to taste different soup,
Same way their predecessors did.

I was soaked by those banging sounds
That proceeded from Buchi's room.
Those sounds gave me sleepless night,
Coupled with the moaning and groaning caller tunes.
That kept me wondering
What they might be doing.

I was soaked by those blasting booming sounds of boko's alarm.
That almost deafen my ear drum,
Putting many souls in low syndrome.
Fear killed many,
Those blast injured many,
And many were buried in the catacombs unprepared. 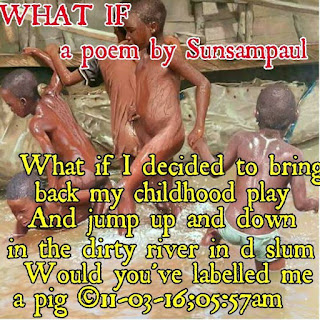 What if
I decided to bring back my childhood play,
And jump up and down
In the dirty river in the slum
With my buddies.
Would you've labelled me a dirty pig?

What if
Those moment past,
Reminds me of the goodies of life.
When I don't know the torment of heart break
Until she left me for another guy,
Just cos she is in need of money and not to be called honey.

What if
Those moment when Chelsea used to be blue sea had past,
It's now time for them to feed from their faeces,
And suffer the sufferings of suffer heads.

What if
The boom boom sounds of boko's alarm,
Turned overnight into the angels' trumpet of rapture.
And out of fear you all went to hide yourselves,
Leaving only me to be ruptured.

What if
I galloped to the part of Cleo patra,
And sounded like Shakespeare.
Same voice my father used.
Landed him in the judiciary.

What if
The wind sings,
And the zincs play the sound of ocarina.
Even my bed hugs me and I'm in the cold arm of cold,
Shivering like a baby with high fever,
When the rain, rain heavily.

What if
Night comes and we all waited for day.
Day refuse to surface
Only for us to notice, it's the end time.

What if
My prowess created a muse to you
And you hid them in your cocoon.
Just to prevent me from knowing I've touched souls with my prowess.

What if
I'm not a poet,
Would you've been my friend,
Or even glance at my pieces?
Would you've even listened to my audios
Or demanded for my voicing? 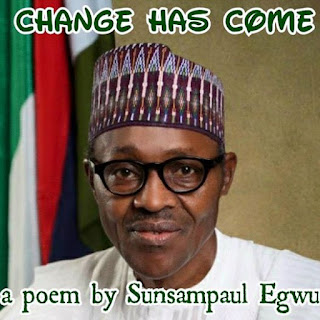 ¶
Now that change has come.
I'll sail through the deadly moon of our ancestors,
to appease the gods of the forest.
So our sisters will return to us not with horse.
¶¶
I'll raise my fist to punch the cloud,
and rain down thunder to strike those who decide to put asunder,
and those who refused to surrender.
¶¶¶
I'll paint an ugly smiling face on those hooligans.
Whose noses are longer than their hands,
to smell the progress of others and cause a heavy downfall.
¶¶¶¶
Now that change has come.
I'll send the bomb blast of my bomb
to bomb those boko bombers;
whose boom boom sounds are giving us heart attack.
¶¶¶¶¶
I'll gallop into the catacomb of those sages, maestros and gaffers,
whose works are yet to be accomplished.
And I'll swallow the stars to become a shining star.
¶¶¶¶¶¶
I'll change the changes of those who need change.
And bend the oesophagus of those in poly-thief.
To vomit our money they deposited in their rainbows.
¶¶¶¶¶¶¶
Now that change has come.
I'll cause the rain to rain down acid rain on earth.
And wash away the scene-full sins of sinners.
So the sun will doff its hat and the cloud bow in respect.
¶¶¶¶¶¶¶¶
I'll raise my placard in the market at night,
until my eyes taste the lip of light;
where peace will be with no pieces
And unity will surround our smiles,
As nemesis crush those boko bombers.
¶¶¶¶¶¶¶¶¶
I'll raise my voice to the heaven
as my knee kiss the floor.
Chanting incantations in supplication,
to behead the strength of those evil doers, leaving them in shambles.
Eradicating the rate of babies breastfeeding babies.
And the taste of sacred nonsense in fornication by the youth.
So the change will be positive and we'll all live in unity, purity, humility and sincerity
©Copyright
Posted by Unknown at 8:05:00 AM No comments: Links to this post