KALU AND THE BEAUTIFUL WITCH by Sunsampaul Egwu 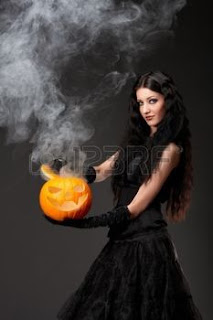 On a very busy day after the heavy downpour in Umuze village,
Kalu,  a poor hunter had no food to feed his family. Even the animals
in the bush who were all busy searching for their preys to feast on
had ran to their hideout. Kalu wanted meat for his family, it has been
3 weeks since his sophisticated traps caught any animal.

After much thinking, Kalu headed for the bush the next morning.
He left with him, two water bottles, his hunting bag, traps, weapons,
and few other things. He said to himself,
"I must go home with two animals for feasting and sale, I can't be a
hunter and be starving." He expressed so much enthusiasm.

Nine hours past, Kalu didn't see any animal neither did his
sophisticated traps catch any. He's the only hunter in the village who
has five traps that are refined, yet he remained poor for being
unfortunate. He became worried and went further in the bush. It was
getter darker but Kalu still insisted he must wait till he get two
animals for sale and feasting because it has been long he tasted meat.

As Kalu moved further in the already dark bush surrounded by the
hissing sounds of night insects and unseen snakes, he came across a
beautiful lady whose eyes were dazzling and stunning, but she was in
black linen gown. Kalu who's already a fearless hunter asked her who
she was, but she shouted at him. "Will you not go home and let us have
our meeting in peace." Kalu was astonished, he didn't know what
meeting she meant.

The lady then said to him "I am a witch whose teeth devour human
flesh, who is always drunk to stupor on by human blood". She said all
these to scare Kalu away, but Kalu being fearless said to her " I am
Kalu the fearless hunter who's poor even though with sophisticated
traps, whose voice can't be seized, and whose accent is so innocent
like that of a decent saint."

This exchange of words and personal praises continued until the
lady began to fall in love with Kalu's accent that sounded like decent
saint and that of a Fulani cowboy.

She was confused.
"what do you want here, tell me and it shall be done." She said this
because her eye charm she used to charmed Kalu in order for him to die
failed. Kalu answered " I am here to get two animals for my family and
for sale, I'm poor and haven't tasted meat for 3 weeks." Before Kalu
would finish saying the last word, a life deer and a grass-cutter
appeared behind him. He turned and saw the animals, he shot them dead
and thanked the beautiful witch after which he went home happily with
the deer and the grass-cutter.
©Copyright
#Sunsampaul Egwu Philosopher ~SEP
+2348180861170
02-06-16
05:34am


Sunsampaul Egwu Philosopher is a poet, instrumentalist, published
writer and a computer science student. He's a pioneer of Ghetto City
of Poetry and the founder of Citadel of Life, a  lover of children and
a life changer with the zeal of helping souls in the slum,  he also
lecture lads and lasses in writing. He started writing when he was six
years. He has written motivational books, such as words of wisdom to
the nation, Turning your plight into your flight,  Words of
Encouragement to the Nation etc. But yet to publish them. He has
published one of his novels titled IKENNA AND THE ZEBRA. it is an
African folktale. He loves reading books like prose, poetry, drama,
bible etc and he love blogging. He blog@
www.citadeloflife.blogspot.com
Email: sunsampaul4globe@gmail.com. facebook: Sunsampaul Egwu. Tel: 08180861170
Twitter: @sunsaint96