THE HARD TIMES by Sunsampaul Egwu 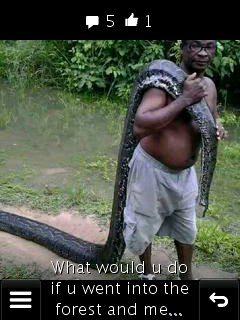 There once lived a man called Okafor. He was a strong hunter, who
subsisted on what ever he realized from selling the animals he killed
after hunting.

Okafor had only one son, called Ifeanyi who followed him to hunt
in the forest. Ifeanyi was determined to be a strong hunter like his
father. So he always practice with his father's hunting tools, gun,
arrows and the likes. Ifeanyi was only 12 years old when he started
hunting with his father.

"Father," Ifeanyi called. "What would it take for me to be more
stronger than you"? "My son I always wanted you to be stronger than me
and be wiser than me, I'm delighted you asked, now you must practice
harder, be peaceful, smart and fearless, above all be prayerful" his
father replied.

After many years, Okafor became feeble and aged to continue
hunting, he confined in his son of his inability to continue hunting.
Okafor had before now armed Ifeanyi, his son with every paraphernalia
needed to be a strong hunter even stronger than himself.

There was a fearful forest in the village  on which no hunter
has entered for fear of being devoured by wild animals whom were said
to be inhabitants of the forest. After Ifeanyi had bad days coupled
with starvation that struck him and his father. He decided to go
hunting. On his way he couldn't find any animals to hunt and none was
caught in his traps. He reasoned to himself to go into the fearful
forest perhaps he may be lucky to return with big Grass-cutter.

Ifeanyi who is now 18 years of age, eventually concluded and
headed for the fearful forest. On getting there, he missed his way and
spent hours in the forest after which he was been chased by a Lion
that later killed him, devoured his legs, heart and eyes, leaving
other parts untouched. His father who didn't know that his son had
left the ordinary forests for the fearful forest was busy
contemplating what might have happened to his only beloved son,
Ifeanyi.

Two days later, a hunter who mistakenly chased a Deer into the same
fearful forest, found Ifeanyi's corpse already smelling with Vultures
feasting on it. He quickly ran to summon his weak father who
vehemently followed him to the Forest's path. The man with the aid of
some warriors wrapped Ifeanyi's corpse and carried it out to the
Forest's path for his father to see. The weak Okafor who was already
ill, collapsed  after seeing his only beloved son breathless, smelling
and dead.
©Copyright
#Sunsampaul Egwu Philosopher~SEP
+2348180861170
03-06-16
12:39pm

Sunsampaul Egwu Philosopher is a poet, instrumentalist, published
writer and a computer science student. He's a pioneer of Ghetto City
of Poetry and the founder of Citadel of Life, a  lover of children and
a life changer with the zeal of helping souls in the slum,  he also
lecture lads and lasses in writing. He started writing when he was six
years. He has written motivational books, such as words of wisdom to
the nation, Turning your plight into your flight,  Words of
Encouragement to the Nation etc. But yet to publish them. He has
published one of his novels titled IKENNA AND THE ZEBRA. it is an
African folktale. He loves reading books like prose, poetry, drama,
bible etc and he love blogging. He blog@
www.citadeloflife.blogspot.com
Email: sunsampaul4globe@gmail.com. facebook: Sunsampaul Egwu. Tel: 08180861170
Twitter: @sunsaint96