KATE AND HER EXAMINATION 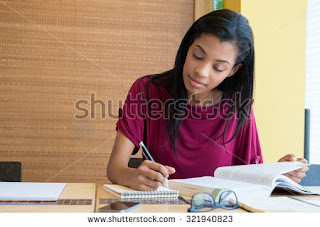 Taking an examination is one of the ways a student can be promoted to
the next class. Kate a brilliant girl, fair in complexion who has the
shape and curve of a model is just 16 years old and she's preparing
for final exam in secondary school.

SSCE is used to give certificate to a student who has completed
studies in the school. Her father died when she was  three years old.
Her mother will always tell her "My daughter, there are different ways
students can prepare for their examinations, they should read their
books and listen to their teachers, doing their assignments and asking
questions in class. They should write their notes correctly and neatly
and read widely ahead of topics". This has been the alarm that rings
in Kate's ear when it's almost exam time.

Kate is no doubt brilliant, but her brilliancy and beauty are
gift from God. She's the only child of her mother who struggled to
make sure her daughter become a medical doctor. Kate's mother Mrs
Faustina Nwadike, is a trader who sells food items in her small
mounted kiosk in the market a bit far from her house. She never got
any assistance from her lately husband's family , still she still
believes in her God.

Kate whom the mother always advice was busy doing the opposite,
she always galloped to one street and the other visiting friends both
boys and girls, she's no doubt a boys freak but she hate it when her
mate call her such name. A week to exam Kate began preparation, she
was cramming and scamming, she tried to meet up with the exam study
syllabus so her mum won't be disappointed at her. She's brilliant but
not hardworking, so she believed her gift of brilliancy will always
make her pass even with little cramming.

When the D-day came, they all sat for the exam. Kate found out the
questions ain't easy because they were not used to her due to late
preparation and laziness, she did it and all submitted. Subsequent
weeks she kept being angry with the way the questions are, still she
did hers and submitted.

Before the day of mathematics. Kate who wasn't good at mathematics
went to Mr Kunle, a young teacher who was among the invigilators. Mr
Kunle has been invigilating from day one of the WAEC exam and has been
friendly with most of the girls in his hall of which Kate is a
candidate to, she always promised to give answers to any one that can
satisfy him. The whole candidates will laugh and say they're fully
prepare for the exam that they need no helping hand.

Kate was eventually the only girl who gave in to Mr Kunle, she's
a virgin but her ways wasn't pure because she has been with many girls
who smooched her and played with the two pointers on her chest region.
Mr Kunle told her that they've just few today because the exam is the
following day. Kate accepted and had fun with Mr Kunle who defiled
her. She found it not a sin and offence against God and her mother,
she was indeed in the pool of ecstasy after three rounds of sex not
knowing she's only bending her future.

When the D-day came Mr Kunle wasn't lucky invigilate due to it's a
general and most important course which demands matured invigilators.
Kate began to panic when she couldn't find Mr Kunle in any hall, she
was in a bad mood and wrote badly. Two weeks later she started
throwing up. This continued for two weeks before her mum discovered,
she took her to the clinic and after the test. It was released that
Kate is three weeks pregnant. This caused a trauma in her poor
mother's life that landed her in stroke. Two days later her mother
died. And Kate wept bitterly for loosing her mother, failing wofly in
exam , and being pregnant for Mr Kunle who is nowhere to be found.