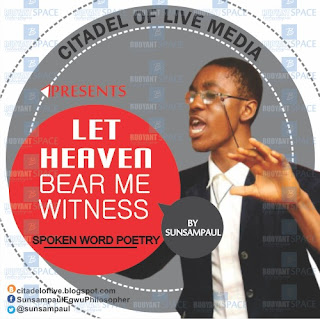 After publishing 1000 hard copies of my first book, launching the electronic version of my second book. I'll be releasing for free download my 9th spoken word audio on my birthday Saturday, 25th February 2017 by 3:33pm. The audio titled let heaven bear me witness talks more of the present predicament we face in our nation and why we need to be strong. - Sunsampaul

The audio is titled "Let heaven bear me witness. It is indeed an audio with a solemn sound track that will touch lives and inspire many to think positively and keep hope alive.

Sunsampaul Egwu popularly known as Philosopher is a poet, a published motivational writer, an instrumentalist, a vocalist, a graphic designer, a computer scientist and a blogger. He's the award winner of ‘join me write’ poetry contest hosted by the poetry court and also winner of talented poet contest. He’s the President and Chief Sacristan of Armed forces Altar Servers Association. Lead representative of Poets In Nigeria Ajegunle Connect Centre. He bagged 2nd place in the Poetry court award for young spoken word poet of the year 2016

He was interviewed on metro FM 97.7 Lagos, 15th November 2015 where he performed one of his poems titled PASSION WITH NO ACTION and he was also interviewed on rhythm FM 93.3 Lagos, 28th February 2016 three days after his birthday 25th February where he also performed his poem titled FULL OF STRENGTH- FOS. Both interviews and voicing were under vividverses. He's the C.E O of Citadel of Life, a pioneer of Ghetto city of poetry, an active member and contributor of Peregrine Reads, Poets in Nigeria PIN, Figure of speech FOS, the poetry court, writers connect, talented poets, transformed family, 633 academy, words, rhymes and rhythm, LiteraNation, writers lodge, doveline poetry, ODP-African poets and vivid verses.

You can reach him through Tel: +2348180861170and +2349098285261 Facebook: Sunsampaul Egwu, Twitter: @sunsaint96 Instagram: @sunsampaul, Gmail: sunsampaul4globe@gmail.com Ymail:sunday.egwu96@yahoo.com, Pinterest: Sunday Egwu Sunsampaul has written many books to the nation such as W.O.S(words of salvation),W.O.T(words of transformation),W.O.W (words of wisdom),W.O.E(words of encouragement) that are undergoing editing. He's the writer and author of the African folktale ‘IKENNA AND THE ZEBRA’ (2014) with grammatical construction that aid the English of children and youths with graphical and artistic illustrations and glossary. He has released his audio poem album titled ‘WHAT WOULD YOU DO?’(2016) under the influence of Prince Ifeanyi Dike in Greenage Studio Allen Avenue, Ikeja, Lagos, Nigeria and an anthology of poems titled ‘SAVE THE WORLD.’ Sunsampaul is a youth with much zeal to help other youths and also a teacher.

Email ThisBlogThis!Share to TwitterShare to FacebookShare to Pinterest
Labels: Adverts